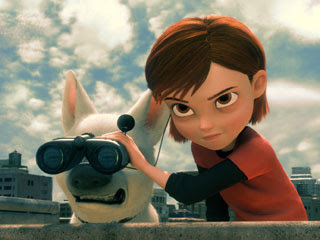 Posted by mark pudleiner at 3:08 PM

So my girlfriend and I just got back from a 9:30 pm showing of Bolt and it was amazing! Story, editing, acting, production design.. everything was top notch and reflected the best putting forth their best effort. An excellent film and everyone involved can be proud of the final product even though the process looked so incredibly demanding. Great film!

I'll be seeing it with the family { with 3D glasses on } during the thanksgiving holiday at the El Capitan in Hollywood Ca.

Looking forward to it.

It was so awesome! The animation on Bolt(himself) was excellent. I was afraid i was going to hate the whole buzz lightyear-esque story line, but i was pleasantly surprised. The action sequences were incredible and all the shots were well executed.
Definitely see it in 3d! It made it even better!

Oh Bolt the Super Dog! Definitely a super achievement! I have some extended notes on my blog... http://mayakarp.blogspot.com :)

I really enjoyed Bolt! I too was a little apprehensive about the Lightyear-esque synopsis but they took it in a different enough direction that I didnt even think about it during the movie.

I think everyone will agree that the hamster was a riot but I loved Mittens the cat! I just she was a really genuine and likeable character, and the voice acting seemed natural. Shes also my favorite character desing out of the bunch. Some real Joe Moshier appeal in those shapes!

Animation was entertaining and felt great, very natural. The girl was a little uneven acting wise, but overall I loved the balance of naturalism and caricature of the cast.

The ending was satisfying and my fiance even teared up a bit.

With Kung Fu Panda, WallE, and now this. Its been a great year for some real quality films!

Imho... Disney best CG feature to date. { As it should be... only getting better and better }

Amazing action sequences.
So much fun to watch.
great job from the story crew!

Very likable main characters getting you involved with their story. Some very appealing character animation on Bolt. So cute and once again .. appealing!

Loved the fire seq at the end...beautiful work with the smoke etc. Seemed very believable with them losing air and passing out.

Great work all around.
take the family!

Saw BOLT after so much recommendations and thought it was good. Defiantly a step up from Chicken Little and Meet the Robinsons (which I felt wandered from the story at times for the sake of jokes).

The animation of the main characters was great but some of the human background characters were a little iffy (I blame the rushed production schedule after the whole American Dog fiasco). As for the painterly look, only noticed the difference in a couple of spots, which is good its not distracting but bad because they spent time and money on the tech.

I thought the story was solid, even if sprinkled with familiarity and being a bit slow at times, but the characters themselves were great. Wish we could of gotten to know Rhino a bit more, maybe another side of him (besides being 100% fanboy), like we did with Mittens and Bolt.

Supporting cast was great too. Love Dr. Calico's cat messing with Bolt when he was in his trailer and Penny's agent was hilarious. It was also nice to see a distinction in personality between New Yorker pigeons and Californian pigeons. Filled with fun characters.

While I enjoyed both WALL-E and Kung Fu Panda more, I still recommend BOLT to anyone with reservations, as it's less childish and more solidly put together than Disney's other recent efforts.

I didn't see it in 3D as I unfortunately don't have a 3D theater close enough.

I got a chance to see Bolt, and it was very entertaining! I think it's stronger than Meet the Robinsons, and the characters were amazing. I saw it with my friends (in their mid-20s) and they all loved it. success!