Getting into Disney Feature Animation in 1993

Late 1993 I was wondering if I should take the Disney Animation Test that I had heard about. One of my friends at the studio warned me to not take it as Disney never hires anyone if you do a test. Instead, to get in, I should just hand in my portfolio. I thought about it and decided to do the test any ways. I thought, I will take time off work, a holiday, and work on the test during my break, doing my best. And hopefully it'll work out.

It was a Friday afternoon as i drove over to the Disney building in Glendale where the production of Pocahontas was in full swing. I walked into the reception area and asked for the animation test. The girl behind the desk handed me the one sheet i scanned below and told me to hand it back in 2 weeks later.

So i quickly went home that night and started. I had to animate one scene of Alice picking up a pot of tea, pouring the tea into the cup she was holding and as she lifts the cup to her lips ' something ' happens and she reacts.

I thought I'd be clever and make a test that would make someone laugh. I roughed out a first blocking test of Alice picking up the pot, pouring and just about to sip the tea when suddenly the facehugger from the Alien movie shoots out, grabbing her face, throwing her backwards and all we are left is seeing Alice's legs thrash about.

I asked my college friend , Ken Duncan , {who was directing a small role of the young man Thomas on Pocahontas} if i could drive over to his house in simi valley and see what he thought. Thankfully Ken said yes and after seeing what i was up to he asked me to shift direction with the test. "Know the audience Mark" he said, " You need to understand who is looking at this, it's Disney feature. You have to think of their sensibility and what they are doing. Think more charming. Something more Disney-like. "
Strong advice. Thank you Ken !
I truly believe if i had continued with the violent test, I would had been passed over.
So, instead I returned to my apartment and started over. It was Wednesday night when I drove to Simi and saw Ken. It was now Thursday morning. Blank paper on disc. Drawing one.

I returned back to the studio 2 weeks after I first received the test, handing them my work.
I hoped for the best.
After talking to Ken, I decided to have the Cheshire Cat pop out of the cup and grabbed the twirling cup in mid air then smiling at the young Alice. I studied the Alice work from the film and tried to make her reaction as close as Alice-like as i could. React but a bit constrained, keeping her ladylike as the young lady she is.

I was told by a friend, Dave Goetz { who lived near us in Santa Monica } that the test went really well and that the producer Roy Conli on Disney's new film, Hunchback, wanted to have me phone him.

{ note to students : if you know the studio that you will be focusing on, if possible, make at least one animation test fit into their world {design + performance}.

I started my first day on Jan 17th 1994 joining the Hunchback Crew as an animator.
That was the morning all of  LA woke up around 4 in the morning ... but that's another story :-) 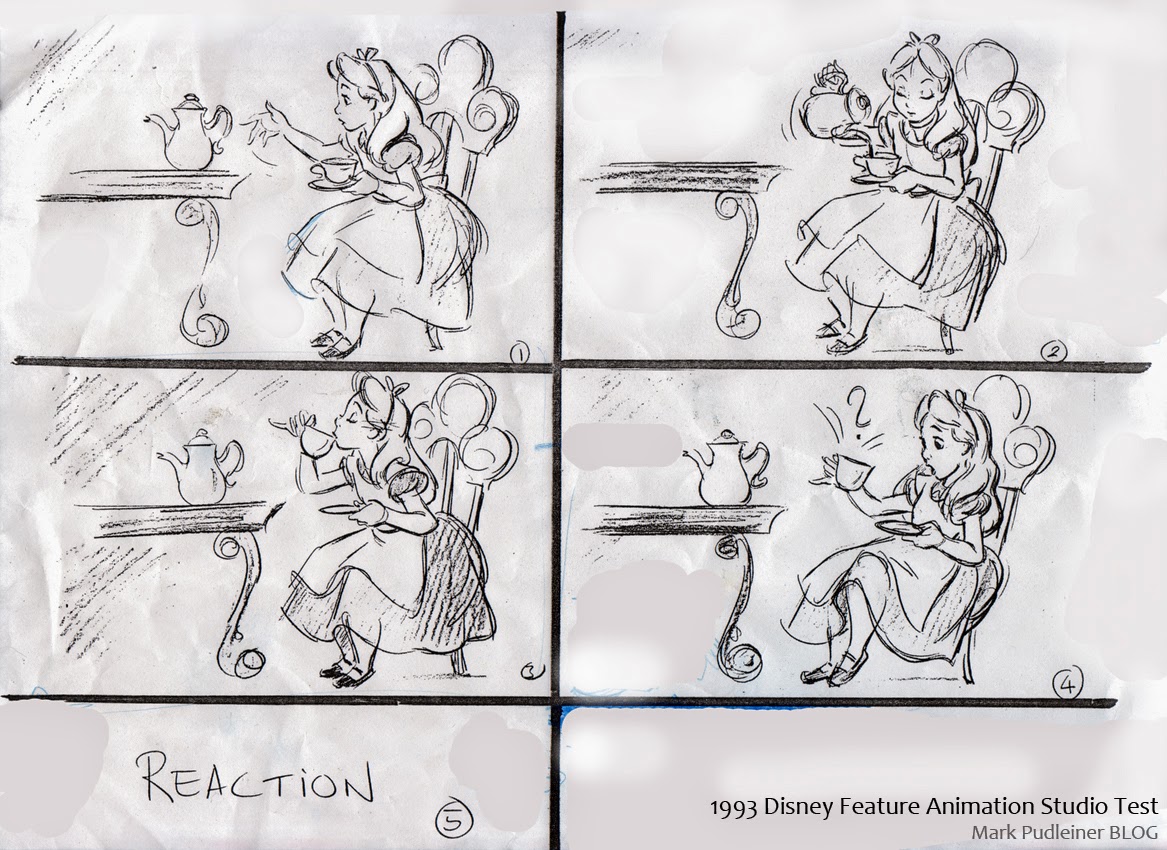