Here are a few of my photos from my collection of 'The Music Room' during the productions of 'An American Tail' and 'Land Before Time'. The years being 1985 and 1986. The studio was located in Van Nuys California and there were 2 buildings that held all the various crew in all the different departments.
The musicroom was the area where storyboards were hung up and Don and other supervisors would meet and work on different issues of the day. From animation tests to storyboard revisions, etc. There was usually something going on in this area during the day.

In this photo a young David Steinberg { assistant director } is running the Moviola helping out Dorse A Lanpher who was the directing animator for special effects on the movies. Cynthia Ankney who was Gary Goldman's { Producer } assistant is taking notes while in the background the films other assistant director, Sue Shakespeare is busy working away.
You can visit Sue's company by clicking HERE.
This is the musicroom looking towards the east, looking away from Don Bluths room. 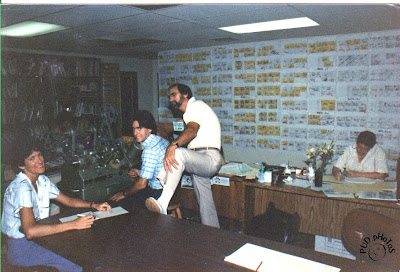 Here is a photo taken in 1985 during the 'An American Tail ' Days. My college friends Dick and Ralph Zondag are walking around the studio again, as every now and then we would have to get up from our desks and just go look around. Stretch the legs for a moment. This is late at night, most have gone home yet wanting to have our work look as good as possible and needing to keep up with everyone else, we would have quite a few late nights .... or very early mornings. New in the business, learning the ropes, doing what you had to do to get better. Fast. These were definitely challenging days and nights as new animators in the business but they really were very good times for us. Amazing group of very talented people that were very open to help us learn. Ralph Zondag is on the left with Dick Zondag standing on the right. They have recently started a new animation company up here in Vancouver and are currently very busy with pre-production on their first feature. 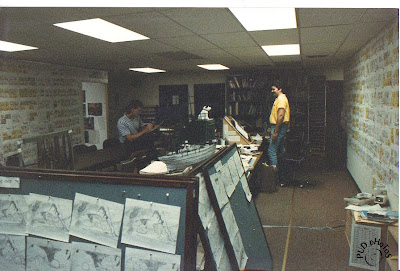 Here is a shot of the music room from the other direction looking toward where Don Bluth had his room. On the far wall on the left side of the photo, just left of the 3 scene stacker shelves is Don's door to his room. The moviola machine is still there as it was in the top photo above. That's background artist Barry Atkinson standing outside of his room. Barry joined us at the studio a bit after we had started on the film. 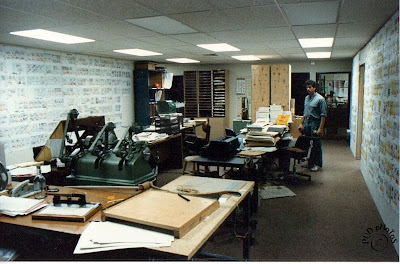