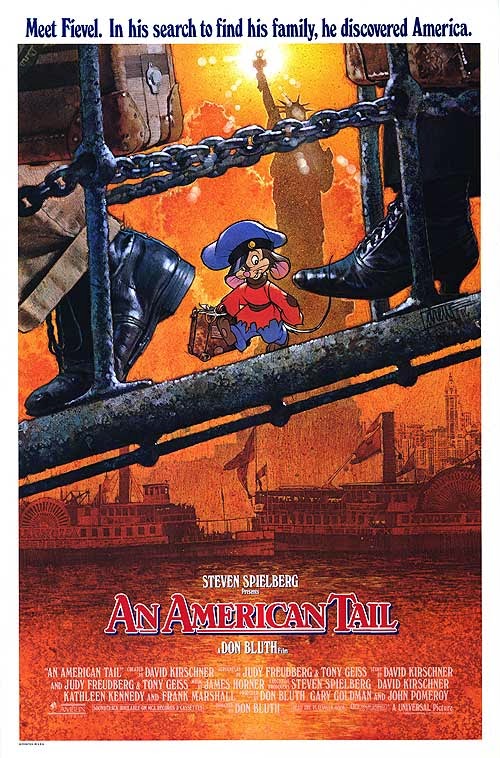 First of all, Merry Christmas, Happy Holidays to everyone - 2014 !
I was finally able to have some time to transfer some of my old videos from my early days as i was just getting into the animation industry.

Here is one that I'm sure will bring back some memories for others.

This is the Cast and Crew screening of Don Bluth's animated feature ' An American Tail ' back in November 1986. We had already started the next production, ' The Land Before Time ' and were starting to pack up our belongings to get ready to fly over to our new studio location in Dublin Ireland.

But before we all left southern California we were able to gather as a studio one last time for this Crew screening. It was an exciting night as after a few years of hard work we all were finally able to see how our efforts all came together.

Don Bluth, Gary Goldman and John Pomeroy had just returned to LA that day for this screening as they were away on the publicity tour being interviewed throughout the country in time for the films release.

It was an exciting time for the young studio. The artists I was able to work with were so open with sharing their knowledge. So many positives at this time and I was very proud and fortunate to be able to have these people in my life. This truly was a 'small' studio and it felt like a family { yes, sometimes a dysfunctional family.... but hey, what family isn't ;) }   Wouldn't change anything and all I can say is thank you Don, Gary and John for your leadership, the opportunity and the support you gave the crew during this production.
I also have to thank my boss at the time during this production Vera Lanpher { now Vera Pacheco } as she pushed me to always do my best.

Below I have posted the names of the people that I know in the video as they walk by in order. Note, I wasn't able to record everyone as multiple things were happening at the same time...so if you're missing... sorry about that.
{ If you have any names of people that I have left out, please let me know and I'll update the list }

The film opens with my friend Joey Mildenberger whom I shared a room with at the studio. He drove me early to the screening so that i could get set up before the crowd gathered. It's sort of funny as he thought at first his name was NOT on the credits, but he quickly found it and everything turned out fine :-)
Also, the first boy that enters the lobby is Phillip Glasser, the voice of the character Fievel.

Hope you enjoy watching the video.

People in the video in order of appearance :

Posted by mark pudleiner at 7:57 PM

Awesome video, Mark. Thanks for posting this.

They don't make them like that anymore! Thanks so much for sharing. I know the blog is updated only ever so often, but I just wanted to say thanks for doing it when you do, there's a lot of stuff that's inspired me as an animator (and person) and I keep this spot bookmarked in case there's anything new that pops up. :)