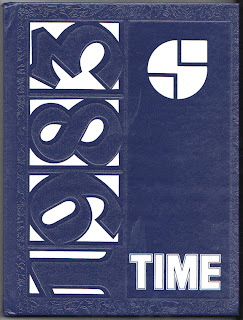 Sheridan College in Oakville Canada 1983. It was first year college for myself and many of my friends. As I teach my students today, I tell them that some of their fellow students sitting next to them may very well be with them for their careers. Maybe coming and going as jobs start and finish, but the connections made in college can last a lifetime. I just had Dinner with 2 college buddies last weekend with my family. We joined another 2 for ' American ' thanksgiving up here in Vancouver. Just congratulated another close college friend about his new gig at Pixar. And the list goes on. It's such a Industry of networking. Animation is very much a small and tight Industry. And within it, a lot of people know a lot of people. So the connections you make, the friendships you make can very much help direct your path as you go forward once you leave college.


Below are scanned photos from my first year in college. It was a great time with fond memories. I'll list some of the people that I had worked with at various studios as the years went on. { I may have a few listed in the wrong class, but I think this is where everyone was. }
Click their names to see their animation path since these photos were taken.

Rej Bourdages { good friend and even better poker player }, Howy Parkins { Layout / Storyboard artist / Director, and a great hockey player. Played in front of me on a few teams { I was the goalie } while I lived down in southern California }, Steve Williams, { visual effects supervisor }, Harland Williams, { Left animation for stand up comedy, voice acting then onto hollywood. The rest is history. He actually did return to animation as he did the voice for a character { Carl the robot } in Disney's ' Meet the Robinsons as well as other projects }, Shane Doyle, { timing director / storyboard artist } Bob Angelini { color designer / timing director / instructor Mohawk College Canada} Nik Ranieri { Supervising Animator. Worked with Nik twice at Disney, once on his crew for Kuzco { Emperors New Groove} and the other on Lewis for ' Meet the Robinsons ' } Neil Hunter { Storyboard artist, animator, instructor @ Algonquin College Ontario Canada },  Chris Damboise { overseas supervisor, assistant director, timing director, animator }, Tom Higgerty  [ deceased ] { assistant animator }

Rej, Harland, Eric, Chris and Steve somehow turn up in another photo. ;-)

Jamie Oliff, { worked with him at Disney and he also was a great defenceman on the Ice }, Caroyln Gair, { storyboard artist }, Roger Jakubiec { Layout, Sound editing }

Posted by mark pudleiner at 3:29 PM

Is Lars Pindal the son of KAJ Pindal?

Yes he is. And if I'm remembering right, Lar's sister also joined the course the following year.

It's Roger Jakubiec (63A1) Delighted you brought me back to the Sheridan years again. Worked with artists in every one of the class photos you posted, from coast to coast. Ended up here on Vancouver Island doing layout, slugging TV episodes and supervising sound editing crews from my studio, Skookum Sound: http://www.skookumsound.com/crimes.html

The third year photo shoot was all of us from both small classes up on the bleachers getting pictured together. We started to get up when the photographer shouted out, "OK, class 63A2!" I believe it was Jamie Oliff who told us to turn around and sit backwards for that shot.

What a blast those years were! Thanks for the memories.

A pretty impressive year I think.

roger - not sure why but I just noticed that your post was in the 'spam' area. Just read it - thanks for writing. I'll update this and add you once I get a quick moment.

Vancouver Island. Not a bad place to make a living :-)

wow!where did you get these? i've never seen them.

Wow I didn't know these existed. See kids? I DID take animation at Sheridan lol

I love the fact that I am labeled as “Head Case” in this photo, something to live up to. I don’t think anyone else got this distinction, what an honor.

Mark, I don’t think our career paths crossed again after Sheridan. I went to Animation House in Toronto with Lucy Snyder before moving to England to work for Amblimation the Universal Feature studio. I ran into the Zondag brothers there but the whole Studio got transferred to Hollywood from London when they started DreamWorks. I never saw a Sheridan face again even though you guys were working just across the street. Prince of Egypt was the last classical film I worked on before transferring to CG and moving to Palo Alto to work for PDI. ‘Shrek’ and ‘Chubb Chubbs’ (for Sony Pictures) are the two projects I animated on that won academy awards for best picture in their respective categories. Moved out to Dallas worked on the Jimmy Neutron show in order to find an inexpensive place to raise my three children, my two daughters are in University now, just have my son Damien 15 left at home. I have my own small production company that I run from my desk.