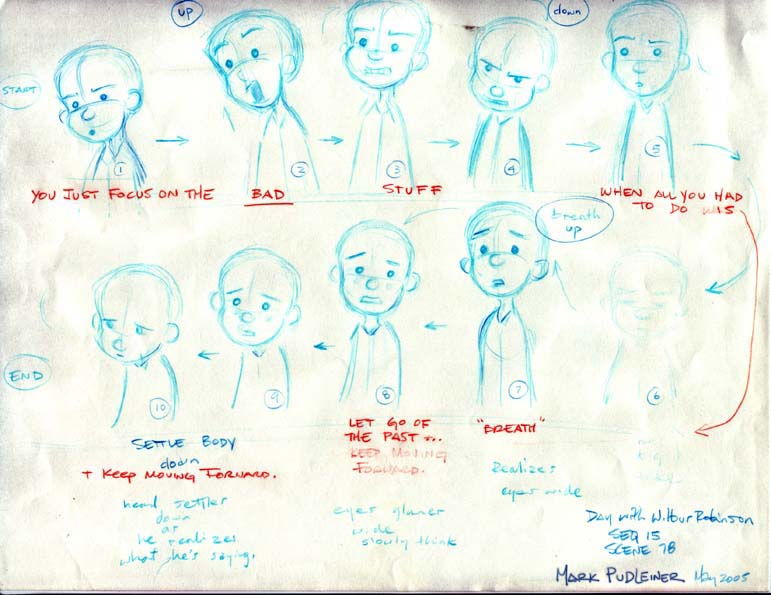 Here is a scene I animated from Disney's feature: ' Meet the Robinsons ' .

ABOVE is the thumbnail I sketched out when I was first cast the scene from Steve Anderson { director }
I just listened to the audio over and over until I had an idea with how I wanted the shot to go.
Then I drew out the thumbnail sketches, putting down the main beats of action, the ups and downs of the body in regards to the audio etc. My first ideas working them out.

BELOW is the scene as I animated it. It did change a slight bit from the original thumbnails but all in all, the main idea for the performance was pretty much there at the thumbnail stage.

Posted by mark pudleiner at 2:10 PM

This is very inspiring! Thanks for sharing ^_^

Thanks for visiting.
I checked out your short film.
Some very nice work. :-)

Also I love the way your website moves around.
Very slick.
Did you build the site yourself as well ?
If so, what program did u use to create it ?

Inspiring work Mark, I love the contrast in the delivery between the beginning and end. The punch of the start and slow of the end. You've really played up that change beautifully!

Hey
Am i just started animating and i was thinkin bout doin some animation with dialogue.......So this post i really help full.....i just wanted to know how do u get some reference for it ...I mean do u shoot urself acting it out or wut??

For this shot I did not shoot reference. With most shots I will try and work out the action with thumbnails sketches before any next step.

Depending on the scene, even after the thumbnail stage, I will sometimes go and shoot reference of myself acting out the scene.
I found this is very helpful with physical shots, walks etc.
You can see some nice body motions with the video reference that you otherwise would not of thought of.

This scene was a pretty stationary scene with the character pretty much sitting down. So I was able to visualize the acting and with using my thumbnails, copied them inside MAYA to create the first rough 'BLOCKING' pass to show the director.
Once it was approved, I continued to the next step, adding breakdowns etc.

So a lot of my work, the creative work, was done at the beginning, before I even turned my computer on.

Hey
Thanks for the reply it's always nice to hear from pro's wut's the correct way to do it....also thanks for those thumbnails....with the poses on particular words that was nice.........i had not seen that before